An entrepreneurial project looking to the future

Our love for bikes begins with the first pedal turn given in the morning, and grows until we stop to enjoy a magnificent glimpse of our Italy.
We build e-bikes with the Italian creative spirit, seeking beauty, the mechanical perfection, the style of design.
New ideas make the world go round, that’s why we continue to work on perfecting WAYEL e-bikes.

Wayel, a bike with a story to tell

With WAYEL brand the idea of a fully italian e-bike is born.

Termal Group, which over the years has established a deep experience in the Far East concerning the field of air conditioning, enters the market of electric mobility and founds Wayel: this with the goal to give the Italian interpretation of the phenomenon of the electric bike, that represents a real boom in China. 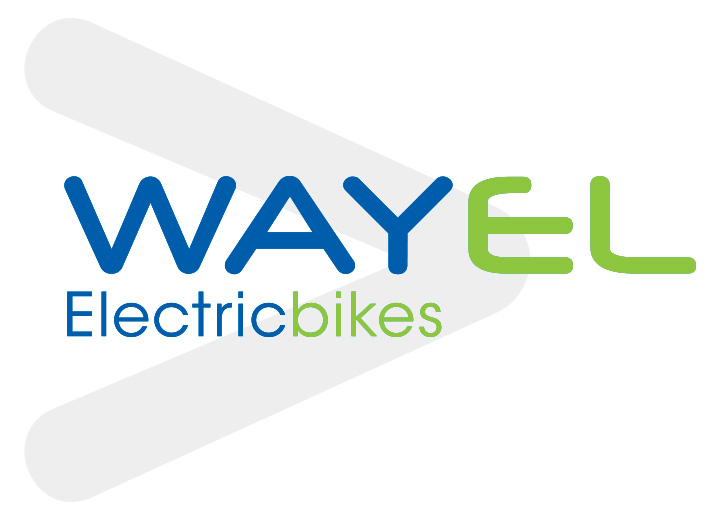 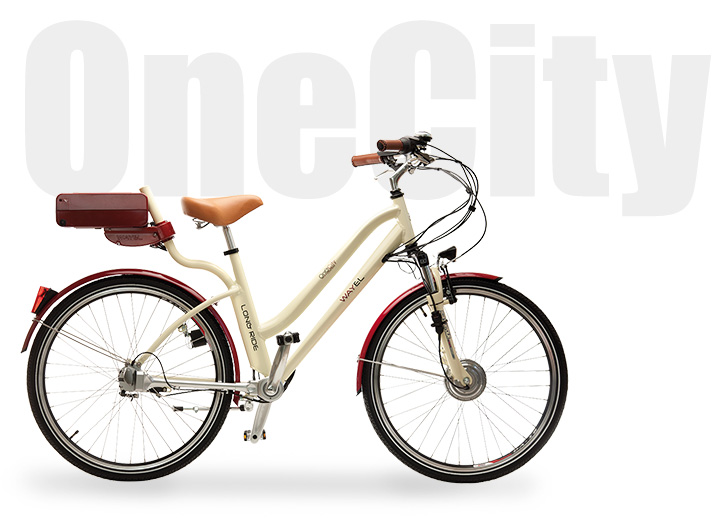 ONECITY, the first e-bike made in Italy with cardan transmission.

In cooperation with the University of Bologna within the program of battery testing, OneCity is born, the electrically assisted pedal bike with shaft drive transmission. Concept & design are Made in Italy exclusively; OneCity is presented at RtoB Innovation Show in Bologna.

150 ONECITY are chosen as courtesy bikes at the G8 in Syracuse.

One City is selected by the town of Genoa for Mobike service, the first project in Italy of bike sharing, with electrically assisted pedal bicycles. In April, during G8 Environment in Syracuse, 150 OneCity bicycles were selected as courtesy bikes for ministers and staff’s transfers to Ortigia island, where the authorities’ meetings took place. In October, OneCity was selected to be presented, as excellence product, at ZIG ZAG fair, National Museum of New Sciences and Technological Innovation in Tokyo. Promoted by the Region of Emilia-Romagna, the event presented the most advanced entrepreneurial realities, particularly attentive to eco-friendly solutions and innovative even with regard to low costs and high performance within the mobility sector.

SUV, the shopping utility vehicle to carry around big loads.

Wayel launches on the market the SUV model – Shopping Utility Vehicle – which is the ideal solution for carrying large volumes and heavy loads. The concept of proximity electric mobility is taking shape in utility interpretation, that is suitable to daily use, as for example for the shopping at the supermarket. This model has achieved a great success, so much so that even today the SUV is a “big” of the catalogue. 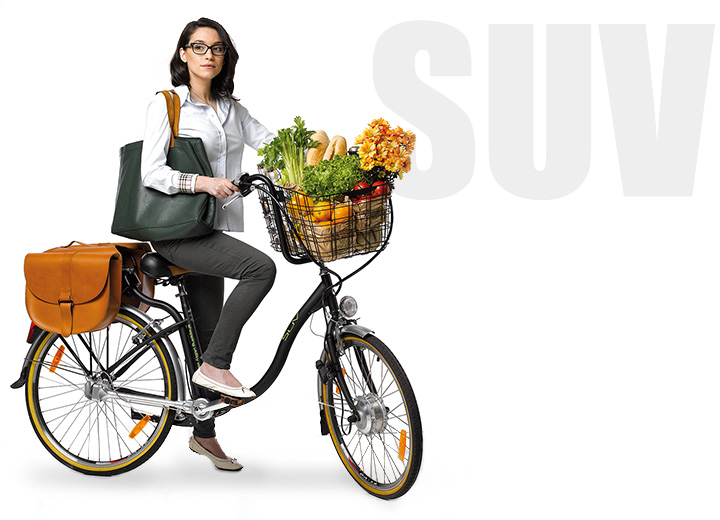 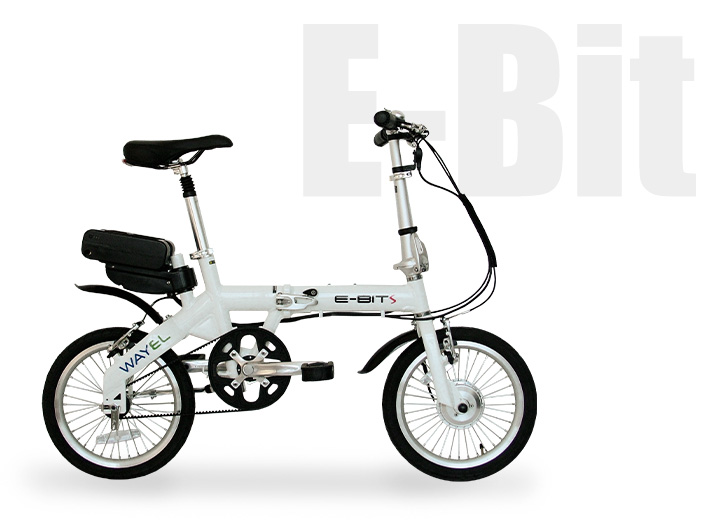 E-bit is the first folding e-bike. UN38.3 certification for batteries.

The range extends: Wayel presents 3 new models: E-Bit, OneCity Long Ride and Eco’. With E-Bit, acronym of E-bike in trolley, Wayel faces the intermodal trasport: E-bike can be easily loaded and stored in its trolley supplied. The bicycle can be quickly folded in 3 simple moves and easily carried by all means of transport: car, camper, train, subway, bus, boat, plane.
The electric bike becomes intermodal and represents a sort of addition to people mobility: a personal e-bike. OneCity Long Ride is the ideal leisure bike for long distances, with a range higher than the average, while Eco’ is the easy electric bike, having a price within everybody’s reach and suitable for diff erent users. Wayel stands out again by introducing on the market a line of lightweight Lithium Polymer batteries: interchangeable on all models, certified UN38.3 and in 3 different energy sizes, these batteries give their customers the opportunity to determine the electric bicycle’s range according to their needs.

It is the year of Futura, the beautiful e-bike with innovating details.

Wayel faces the performance and proposes new models, designed for responding to the particular needs that a normal electric bike can hardly satisfy. Wayel introduces on the market OldTown, OneCity Long Ride Special and FUTURA.
OldTown is the electric bicycle suitable to the old town centres: with its lively acceleration and triple cushioning, OldTown allows you to face uneven pavements with great comfort. OneCity Long Ride Special, combined with the 4th battery size and the new ESEB software, achieves a record range with only one recharge: 160 km. FUTURA is a technological goal of Wayel.
An electric bike that does not fear upward slopes and which loves long distances. FUTURA is highly comfortable and innovative even regarding the antitheft N’lock device. The enjoyable race of St. Luke’s challenge, organized in Bologna on the occasion of the European Week of Sustainable Mobility, marks the record of climbing for an electric bicycle: 8 minutes to cover 2 km of prohibitive slopes. 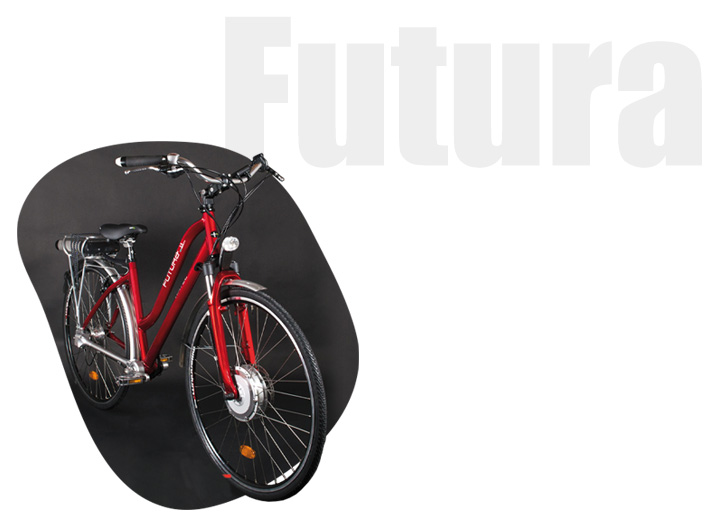 Trilogia debuts, the bike that makes itself ''in three''.

Wayel launches on the market Trilogia, the bike made in three versions. An industrial project, which starts from a single model platform and characterizes into three diff erent types of service, by using customized components. But Wayel’s story does not stop and the year 2013 sees the start of work of the new production factory in Bologna.
In contrast to the strong economic crisis, Termal Group decides to invest and expand its mobility proposal. The new factory of 7,100 square metres will operate in a completely ZEB logic (Zero Energy Building). The building self-generates not only the energy used for the living comfort, but also the energy necessary for its industrial production, that is all the energy needed for the activity. The new complex is designed to house the creation of new models, including an innovative electric city motorbike.
After three years of study and research, the prototype of this motorbike will be presented within 2013. With the production of a motorcycle wholly Made in Italy, Wayel extends the fi eld of its action and runs for the Italian leadership in two-wheel electric mobility.

With MADE 2.0, Wayel starts the new production cycle of bikes made in Italy.

The year 2014 sees the laying of the foundation stone of the new factory FIVE for the production of electrical vehicles, a novelty in Italy. In contrast to the acute economic crisis, Termal Group decided to invest and expand its proposal for mobility. The new factory – 7,100 square meters – will operate in ZEB logic (Zero Energy Building), and will be able to self-produce not only the energy used for living comfort but also that required for industrial production, i.e. all the energy needed to whole activity. The line Made 2.0 was born, by which Wayel inaugurates the new production cycle of the electric bikes: not only designed but also built in Italy. The first Made 2.0 models are FUTURA 2.0 and Trilogia 2.0 (briosa, sicura & poderosa). 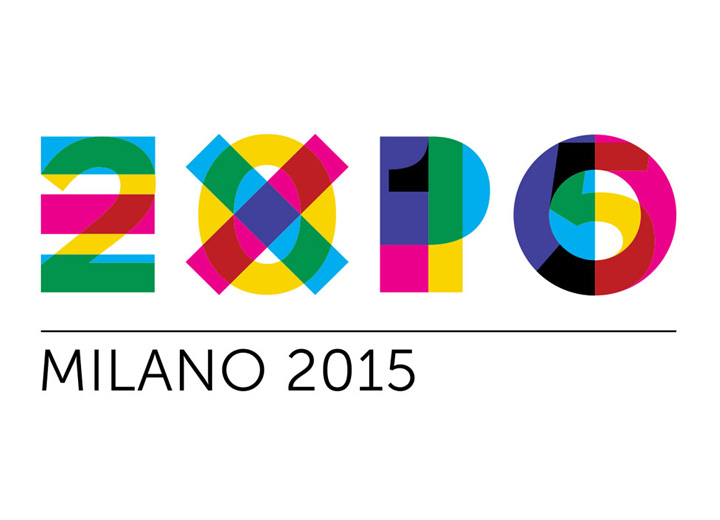 WAYEL takes part to Expo 2015 as a made in Italy excellence.

The year 2015 is the year of Milan Expo, and Wayel too is a guest in the Waterstone stand of Intesa Sanpaolo, to represent the quality and excellence of Made in Italy. Selected among more than 1000 candidates, Wayel attended the World Expo 2015 as a guest in Intesa Sanpaolo ‘home’ telling their own story, and the ambitious back-shoring project with which they intended to bring the production of their electric vehicles from China to Italy.
Wayel is enriched with a new brand: Hinergy Bikes (already born in 2013) is consolidated as a brand offering a complete range of electric bicycles made up of city bike, MTB and folding bike. Modern and cutting-edge design, and quality components to provide the right solution for every need and every riding style.
After capturing headlines in the Italian and foreign press, Solingo, the solar energy cityrunner is officially launched on the market and can be purchased at all points in the specialized chain of Wayel electric mobility and authorized dealers.
The year 2015 marks the boom of Wayel Stores. In just over 12 months, the distribution chain reaches 10 flagship stores over a large part of Italy.
A careful trade policy, the quality of the electric bikes associated with Made in Italy and reliability have led to the consolidation of Wayel brand and to an increase in purchases so as to record the e-bikes sold out in June 2015, in Wayel Store in Palermo.

The growth of Wayel Store strengthens in April 2016 with the acquisition of ITALWIN brand, a leader in the market of electric pedal assisted bicycles.
The acquisition of ITALWIN brand joining the other two proprietary trademarks – WAYEL and HINERGYBIKES – represents the will of Wayel Store to get stronger in the market of light electric mobility and to compete for the leadership of this industry. The distribution chain of single-brand products continues its upward trend, reaching the number of 15 Wayel Stores opened across Italy.

Inauguration of the FIVE headquarters in Bologna for in-line production.

From the design idea to the realization: on 22 May 2017 the FIVE factory officially opens its headquarters. FIVE is located in the industrial heart of Bologna, and covers a total of 7,100 square meters. The automated warehouse consists of 860 workstations. The assembly line with 20 workstations, the storage of the raw frame components and the painting system are integrated in a single rotary system that takes the frames to the painting ovens. 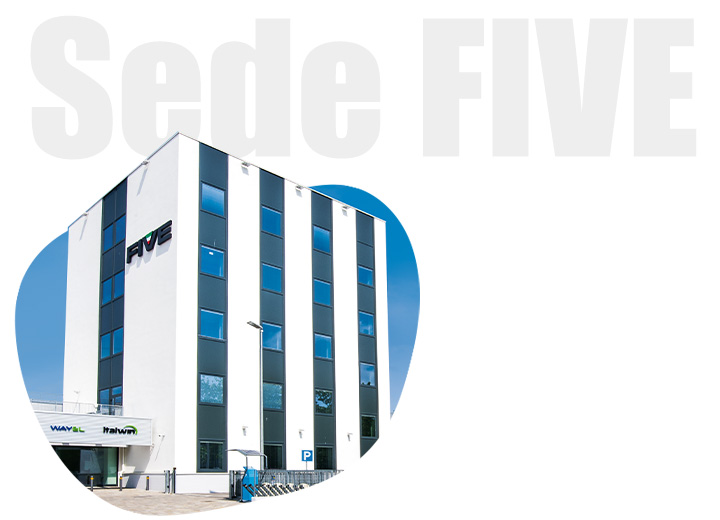 The battery is the primary energy source of the e-bike, it provides the necessary electrical power while riding. FIVE has chosen to embrace the battery market with an in-house production with semi-automatic product-line for its e-bikes, and for OEM solutions. The choice of FIVE is dictated by the need to guarantee high quality standards; the reshoring, started in 2013 with the transfer of electric bike production from China to Italy, continues today with the implementation of new departments for the production of e-bikes’ main components.

All made in Italy, e-Big is the evolution of its folding sisters, with 20″ FAT wheels designed to be more performing on urban routes. Geometric lines and technology are in synthesis the characteristics of ICON 48V, in which made in Italy design and components are masterfully declined in the city unisex, city man and trekking versions. 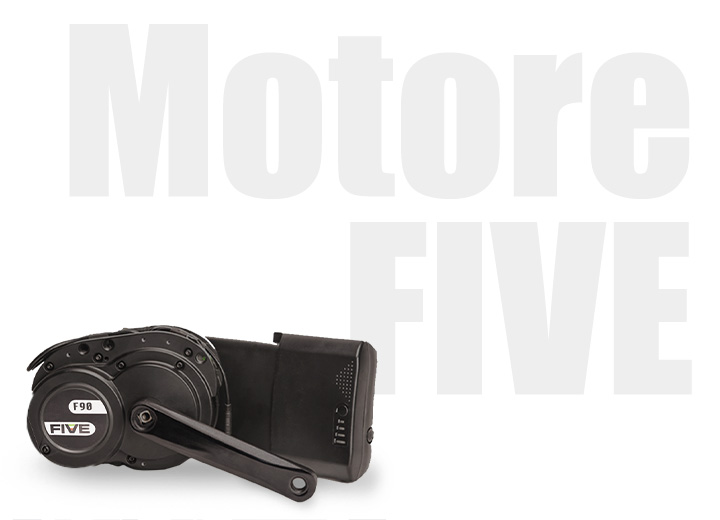 The complex field of electric motors sees FIVE engage in the study of different solutions taking into account some essential fundamentals in the construction and assembly phase of these devices: position of the electric motor, assistance mode, type of recharge, integration into the bicycle frame. The electric bicycles made by FIVE have a configuration with front motor, rear motor and mid motor since there is not only one type of electric bike. 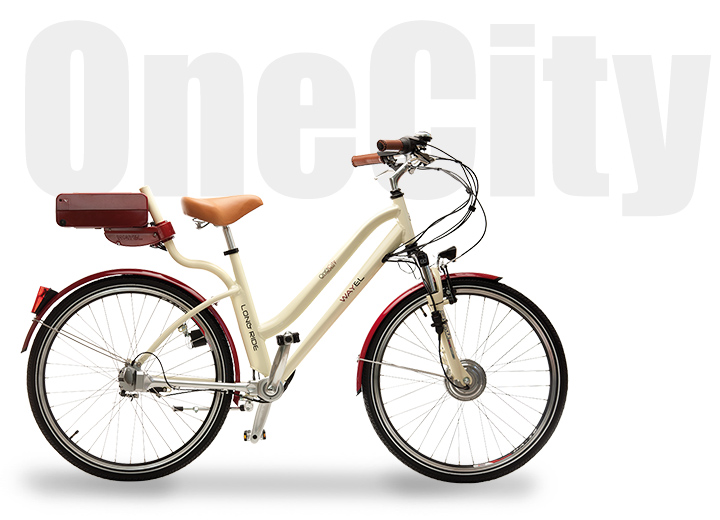 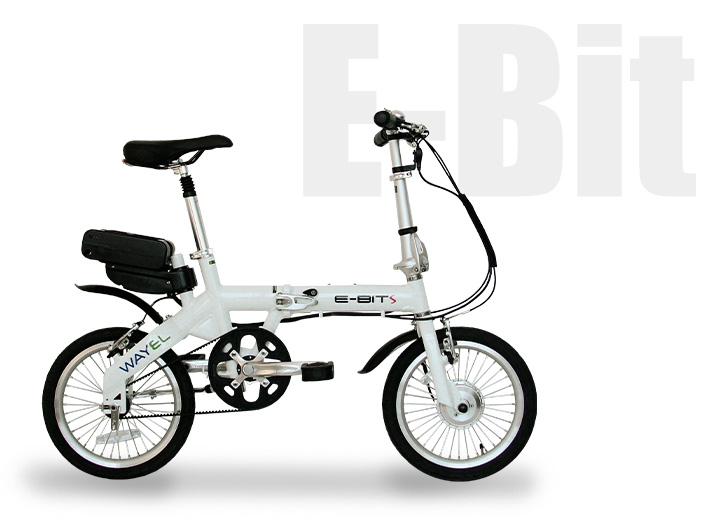